Road to Fortune and The Farmer's Wife

One of my quilt groups has been doing a few of "The Farmer's Wife Sampler Quilt" Blocks each month.  We have been following "The Barrister's Block Blog" for many of the 6 inch patterns.
However, one block that we have had particular trouble with was the one called "Road to Fortune".
The following is a step by step tutorial with, hopefully, enough pictures to make this block easier to construct.
Let me know what you think!
Remember that you are using quarter square triangles in this block.


Try not to sew them together as half square triangle blocks (as I did the first time!)

You need 2 of the 3 ½ squares in your background fabric and your main color. 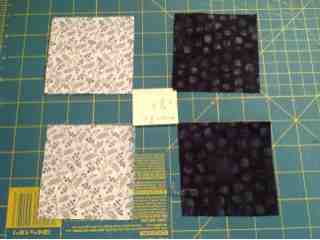 You need 1 of the 4 ½ squares in your background color and your main color. 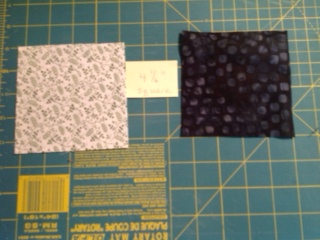 Second, cut all of the squares in half on the diagonal. 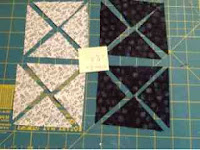 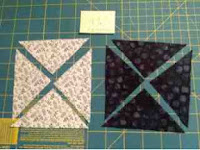 I cut each square separately.  Although, I am sure, if I could accurately stack and cut on the diagonal, I could have stacked and cut all of the 3 ½ and 4 ½ squares at once.


Third, lay all pieces out to see how the block will look when finished.


I have found this block to be deceiving.  It was very easy to turn a triangle and sew it in the wrong place.  By first laying out the block you should (might) be able to see which pairs of triangles will be sewn together. 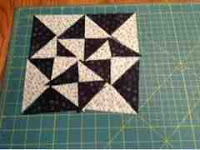 Fourth, now you can sew.


(A)You will sew the triangles from the 4 ½ inch squares together in pairs.  These are the triangles on the outside four corners. 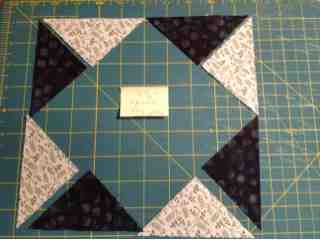 (B) Next you will construct the four Hour Glass blocks separately that will be sewn together to construct the middle of the block.


(See where it intersects on the diagonal) 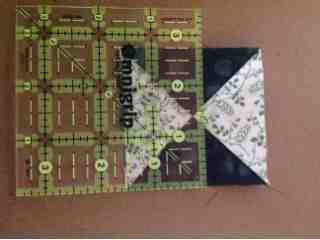 Begin by taking a dark and a light triangle, sew together on the
short arm (see triangle pair at the top of the picture below).  Sew opposite pair together and then sew the pairs together to make one hour glass block.


Repeat for the other three blocks. 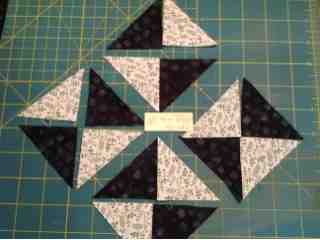 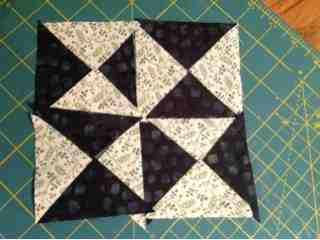 
This unit will be square at 5 inches


(I bet when you first looked at the block you thought you were making half square triangles to get that pinwheel effect in the middle.
I know I did!) 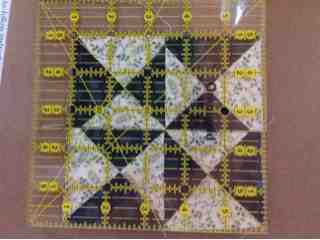 (D) Sew the triangle pairs from the 4 ½ inch squares that you sewed together in (A) to each corner of the block. 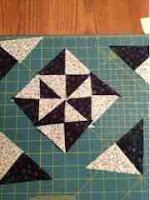 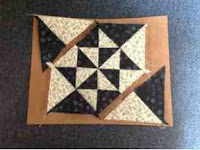 Sew the opposite corners on first.


One more corner to go! 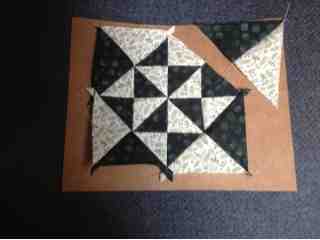 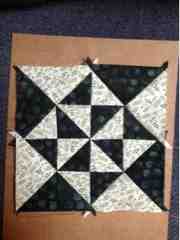