We have a few more days left in September 2017. We have been in a very warm spell with temperatures running well into the eighties.

This picture is from this afternoon about 4:30 pm. Don't look too closely at the date and time on the bottom! I forgot to reset that info after the last power failure from a couple of months ago.  For some reason or other the battery did not kick in - probably due to a dead battery I would guess!
But we have been taking advantage of these warm days with a boat ride every afternoon. 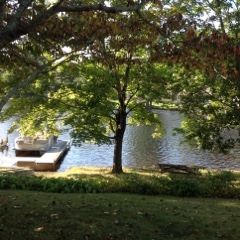 This picture was taken just after we returned from today's ride. It will probably be the last one, since the weather is supposed to change tomorrow and the boat comes out on Friday and I have class tomorrow afternoon.
I guess summer is really coming to an end...
Even if I try to ignore the leaves changing and beginning to fall.
September has been busy with some project finishes making me proud. 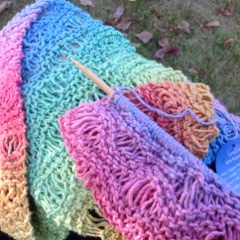 My knitted scarf was a summer project that I only worked during outdoor music concerts and on boat rides. Well, the concerts have been over for several weeks and today's boat ride was the last one of the season, so the scarf screamed "Finish me today", and so I did! 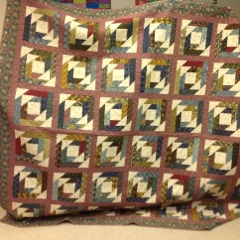 One last picture of Lisa's huge 110 x 110 "Pineapple Blossom" begun in the Bonnie Hunter class last year in September and now completely finished a year later.  She brought it to Open Sew Monday night so we could enjoy it one last time. 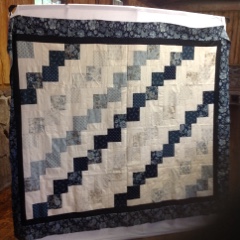 "Falling Charms" became a completed top last weekend. I finally finished the last border during retreat last Saturday. Now to piece the backing and get it to the long armer. 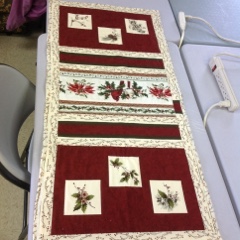 Marie finished her Tablerunner last Friday during Open Sew. It was a compilation of left over fabrics from some of her previous projects. This Kaffe Fasset fabrics top was finally completely sewn last Wednesday at retreat. It has been a webbed top for many months. 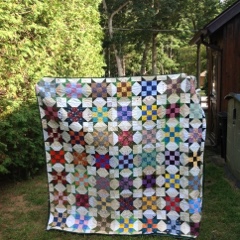 The completed "Sister's Choice in Green" is shown here.  The 49 blocks each have a different green in the triangles. It was pieced as a leader and ender project and mostly sewn in 2016. I tried to find a suitable border fabric for quite awhile but nothing ever clicked. I finally gave up and called it done.  I like how it came out, don't you? 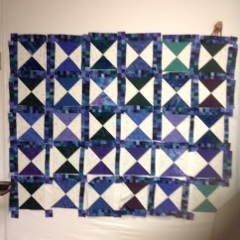 Still not completed, but on the design wall is this blue/purple hour glass and pieced sashing beauty from the early 2000's.  It is scheduled to be completed after I return from California. Maybe it will be my UFO project for the next session. 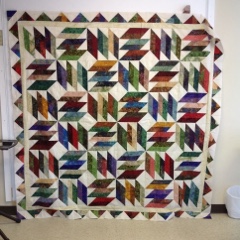 Shown here as a completed top, "Weed Whacker" is now quilted.  It waits for its binding to be applied also after I return from my trip.  This top was begun maybe two years ago, so it is not really a long term UFO.  However it is nice to have it almost ready to be checked off as completed!
September is coming to a close and with it maybe the horrible weather in terms of hurricanes will also end. Harvey, Irma, Jose and Maria, fires in the west and heat in the east. It has been one for the books.
But on a lighter, happier note...
Tomorrow is my aunt's 90th birthday. Happy Birthday Auntie! Sto Lat!
Louise, on the island, reflecting
Posted by Louise at 8:01 PM No comments:
Email ThisBlogThis!Share to TwitterShare to FacebookShare to Pinterest
Labels: Life, Seasons on the Deck, UFO Stash

We went through a few cool days this past week. I wore jeans for a few days.
But summer seems to have returned now that the kids are back in school. 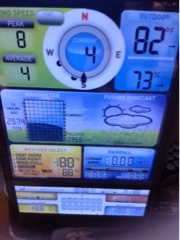 82 degrees Fahrenheit on September 5.  A few more days of summer seem to be left for us to enjoy!
And on to all things quilty....
A binding being completed... 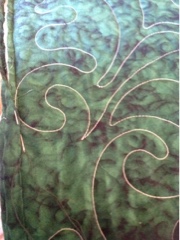 "Sister's Choice" on the front. 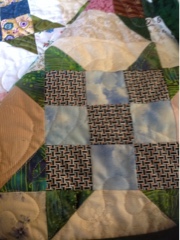 Full view picture to come when the binding is finished. 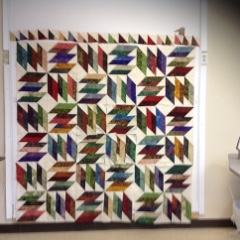 The center of "Weed Whacker", a Bonnie Hunter pattern, was completed on Sunday. 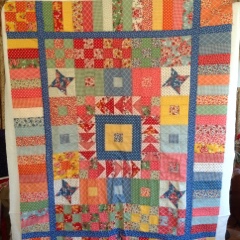 This jelly roll sampler is now finished and hanging on the wall in the classroom. 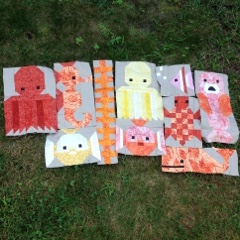 The aquarium continues to grow.  Working on the yellow color way now. 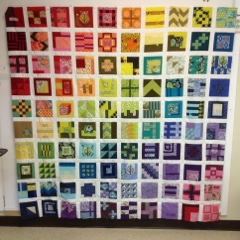 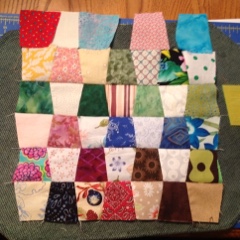 Another thimble block is done.
I think I am going for twenty for the top.
I currently have seven with this one. 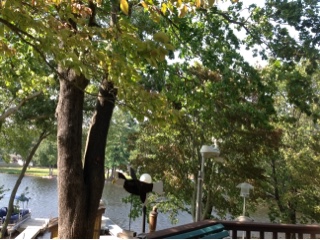 Windy afternoon on the deck
Enjoying the breeze and the warm temperatures.
Louise, on the deck, on the island, relishing the day.
Posted by Louise at 2:46 PM No comments:
Email ThisBlogThis!Share to TwitterShare to FacebookShare to Pinterest
Labels: Seasons on the Deck, UFO Stash
Newer Posts Older Posts Home
Subscribe to: Posts (Atom)