Below is a link to the Bloggers Block of the Month.   I love blocks of the month and I have decided to attempt this one.  I will post a picture when it is done!

Pat Sloan provided the link that is shown here.

Have a Great Day!
Posted by Louise at 3:00 PM No comments:
Email ThisBlogThis!Share to TwitterShare to FacebookShare to Pinterest
Labels: Bloggers Block of the Month, Pat Sloan

It is raining here as a front passes through the area. After it passes the temperatures should be rising into the 90's. I am currently sitting in an air-conditioned room with a sweater. Hopefully I will be able to get home to sew soon. Will post a picture of today's work later today

Posted by Louise at 11:21 AM No comments:
Email ThisBlogThis!Share to TwitterShare to FacebookShare to Pinterest

Block 1 and 2 are finished!

I am working on a Block of the Month using Marti Michell's templates from Marti Michell Perfect Patchwork Templates and a block of the month kit I had originally purchased about 10 years ago!
Yes, it is part of my UFO stash.

The program has been newly released using the Stonehenge fabrics.
Mary and I are working on it at Quilts and More.  This week I have done two blocks.

Having a great time with it. I have forgotten what fun working with templates can be!
Stay tuned for the rest of the blocks in the coming weeks.
Posted by Louise at 1:42 PM No comments:
Email ThisBlogThis!Share to TwitterShare to FacebookShare to Pinterest
Labels: Block of the Month, Marti Michell, UFO Stash

I feel as if I have been on a sewing hiatus.  Being away last week end and a week of preparing for my church's annual festival and just general summer yard  and garden prep, has kept me away from my sewing machine.  I have looked at several inspirational quilt magazines and even pulled out a few long lost projects.  But I have not seemed to be able to find the time to sit at the sewing machine.

So...
Once I finish this post, I am giving myself at least 15 minutes to sew.  I know I won't get much done but I will have (hopefully!) overcome the feeling of being on a hiatus. 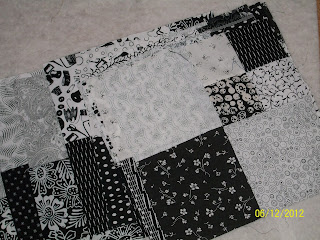 BTW, the last blocks I sewed were these fun black and white blocks.  The fabric is from my seemingly never ending stash of black and white's from the Grange Quilter's swap a few years ago.  The pattern is called "Four X Four" and was found on-line at michaelmillerfabrics.com after the swap a few years ago.  The pattern says it is a quilt by Swirly Girls Design.  I don't know if it is still available.
Posted by Louise at 5:14 PM No comments:
Email ThisBlogThis!Share to TwitterShare to FacebookShare to Pinterest

I love this yarn! I paid a long overdue visit to "The Mermaid's Purl" in Wickford. It is one of my favorite yarn shops. I saw this yarn, as well as several other skeins, that I just had to purchase and do I did. I can't wait to start working on it.
I will post a picture when the scarf is finished.

Posted by Louise at 6:33 AM No comments:
Email ThisBlogThis!Share to TwitterShare to FacebookShare to Pinterest
Labels: knitting

Sometimes sashing rules your life.  I never realized when I cut the pieces way back when that the individual pieces would need to match up in size to something else.  Now I know they do and really if I had thought about it, I would have realized that the strips were cut a shade too large when I began to sew the strip sets together this week.  Well now I have 71 nicely pieced sashings that are all 1/4 inch too big.  What to do??? Trim all 71 down?  Fudge the seams as I sew them to the blocks?

I have made my decision but that cutting will wait for another day.  As you can see the blocks will come out very nicely when they are sewn.  Like those red cornerstones!  Can't wait to sew these together!

Posted by Louise at 10:30 AM 1 comment:
Email ThisBlogThis!Share to TwitterShare to FacebookShare to Pinterest
Labels: Quilt of the Month, UFO Stash

Quilt of the Month

February 2008 - purchased fabrics
February 2009 -cut fabrics and sewed lots of half aquare triangles
February 2010 - misplaced the box of cut and sewn fabrics
February 2011 - what quilt???
February 2012 - Hey everybody!  I found the February 2008 Quilt of the Month and the pieces are all cut!
June 1, 2012 - Ta Da!  The top of February 2008 is now pieced together.  Borders what borders? - I haven't found that box yet - it seems to have been separated from the pieced units.
Date??? - border box found and borders added
Hopefully not too far into the future. 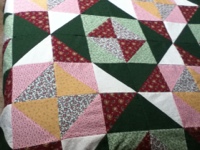