A 1600 quilt (also known as the jelly roll race) has been in progress.
From this 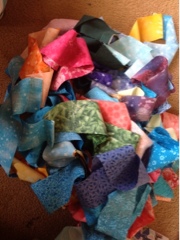 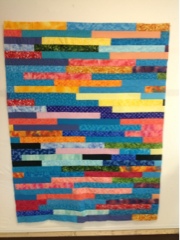 Another sample has been made for the first SIYOB Retreat (Sleep In Your Own Bed). This one comes from my fat quarter stash rather than a jelly roll. Still makes a beautiful quilt and one that you could do if you wanted to purchase fat quarters instead of a jelly roll.
But the first retreat will be all about Jelly Rolls and is called "Jelly Rolls are Non Fattening". It takes place from 6 PM to 9 PM Friday, June 5 and Saturday, June 6, from 9 AM to 6 PM and in between you get to sleep in your own bed!
This is how it works. Friday night you set up your sewing machine for the 6 PM start of our retreat and begin your quilting project.  During the evening you sew and snack and visit with your fellow Retreaters as you work on your project. At 9 PM you leave your space as it is and go home to sleep.
In the morning at 9 AM, you return to the classroom at Piecing with Poppers Quilting Center and continue with your project. You breakfast in the morning and sew and visit. You lunch at noon and visit with your quilty friends.  You sew and snack in the afternoon and finish your project by the end of our retreat at 6 PM!
By the end, you have a lovely quilt top finished and ready for quilting!  Isn't that a wonderful thing?!
I hope you can join us for the first retreat, but if you cannot, don't fret because we have others planned.
In July, the theme of the retreat will be "Christmas in July". How original, huh!
August projects revolve around charm packs and is called "Charm-ing, I'm sure".
Then in September we will work with fat quarters, to make a quilt for this retreat entitled, "Fun with Fat Quarters".
Again I hope you will be able to join us for these fun events. Whether you join us for one retreat or all of them, I know you will have a grand ole time!
Oh did I mention,that the fee includes all of your materials to make a quilt top or in the case of July, a stocking, tablerunner and small tree skirt.  All you have to do is come, bring your sewing machine, threat and cutting tools, a smile and the willingness to have a good time.
Oh, wait a minute, not a good time, but rather a GREAT time!
Hope to see you soon!
Louise from the Studio at the Piecing with Poppers Quilting Center.
Posted by Louise at 3:13 PM No comments:
Email ThisBlogThis!Share to TwitterShare to FacebookShare to Pinterest
Labels: SIYOB

Happy Mother's Day to all of the mothers out there!  As women, we all "mother" at one point in our lives. So even if you have not had children, I wish you Happy Mother's Day since I know you have mothered someone at some point in your life!
Now on to projects in progress. 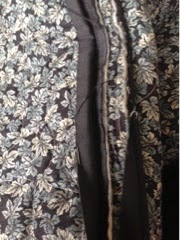 Today's binding is on a smallish quilt, more a wallhanging than quilt, that was done in a guild class in 2003!  Definitely from the deep UFO stash! 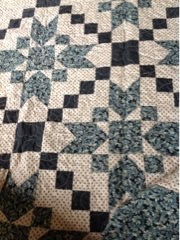 Just part of it, but you get the idea. 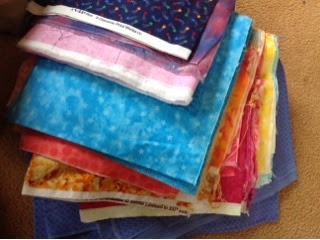 A group of fabrics that are calling me to create.  There are at least 30 fat quarter, or bigger, pieces and several 3 to 5 inch strips in this group.  I think I have a pattern in mind, but do I REALLY need to start another project?  I will have to think about it!
Finally, the washing machine is on the fritz.  As a result, the groupings of fabric that were hiding by the washer came to light recently as I cleared space for the repairman to work.  There must be at least six potential projects hiding in this organized mess. 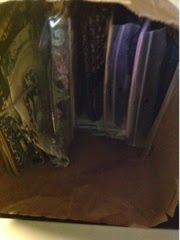 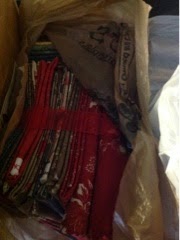 And at least two more here. 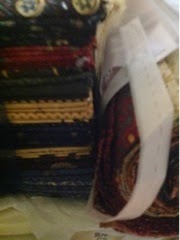 I know the pictures are dark, but it is kind of embarrassing to find all this and realize I truly had forgotten about it.  I am usually better than that!
The question now becomes one of "where do they reside" until it is time for them to be made into a quilt?  I will ponder that as I look out at the changing view from the living room.
Another week or so and most of the pollen will have subsided enough so that the next pictures for seasons on the deck can come from the deck.  But for now another picture from the living room will have to suffice! The view is getting more obstructed each day as the trees continue to leaf out. Finally spring is truly here! 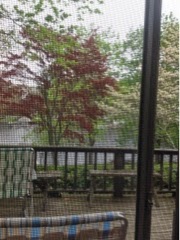 Have a wonderful day!
Posted by Louise at 10:01 AM No comments:
Email ThisBlogThis!Share to TwitterShare to FacebookShare to Pinterest
Labels: Seasons on the Deck, UFO Stash 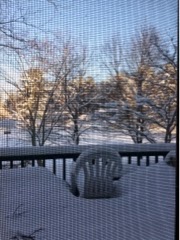 And this is today 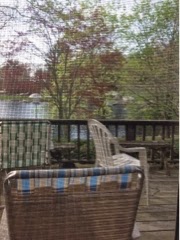 Quite a change, huh?
Now on to today's sewing activity. 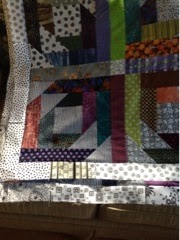 Working on the borders for the 2.5 inch strip "Pineapple Blossom"
White borders are on, now onto the pieced outer border. 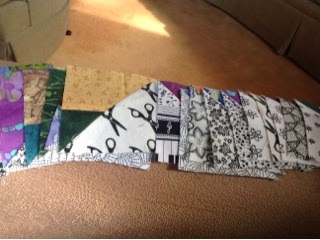 Another UFO almost finished!
Posted by Louise at 4:55 PM No comments:
Email ThisBlogThis!Share to TwitterShare to FacebookShare to Pinterest
Labels: Seasons on the Deck, UFO Stash

Fun on The Island

And a new temperature report! 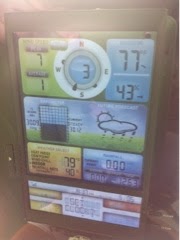 It dropped a degree while I was trying to take the picture!
Well the season is progressing and the quilt projects are also progressing.
I just finished two pillows for P & B Textiles for the up coming Spring Market.  Don't know if I can show you, so I won't until I hear it is ok to do so.  But it has been fun working on these projects the last month or so.
In between, I have been sewing bindings on "Grand Illusion", this year's Bonnie Hunter Mystery, 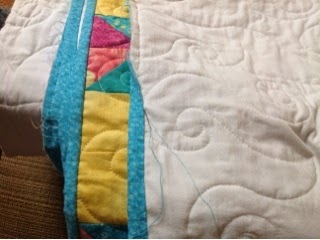 and this little blue number from almost ten years ago! 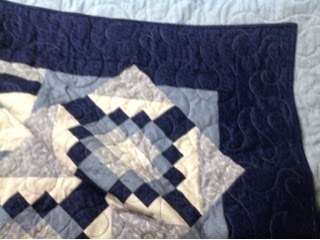 I am finally getting into the deep UFO Stash and beginning to clear out some things.
Of course I continue to add new projects. 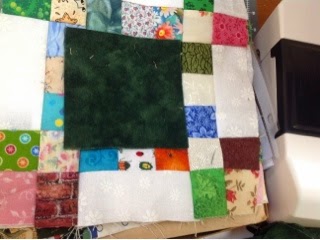 Here is a picture of the newest scrappy block.  It is called "Idaho Square Dance" and is from Bonnie Hunter's Addicted to Scraps column in the May/June issue of Quiltmaker.  I want to make 49 blocks at least.  I haven't decided how to set them, but that is still a long way off since I only have 5 blocks done.
Also waiting for a few hours of sewing time are the following projects that need just a little more attention before they are complete. 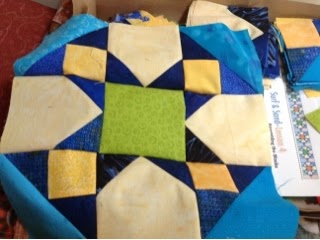 Surf and Sand, a pattern from McCall's Quilting. 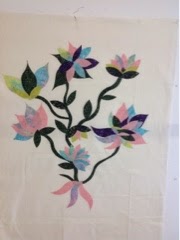 My project from Sue Pelland's which I took in April.
I am also waiting for a few continuous hours so I can sew some finished blocks together. 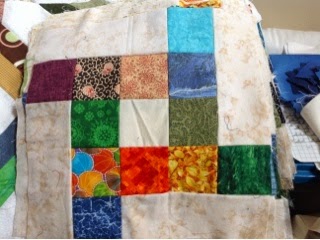 This group of blocks used 3 inch squares and is also being done in the 2 inch size. The three inch blocks are completed but I am still working on the two inch ones. 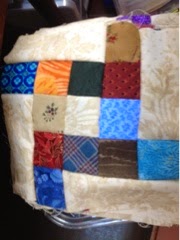 My blocks from a Ninigret workshop in April are waiting to be assembled into a quilt. 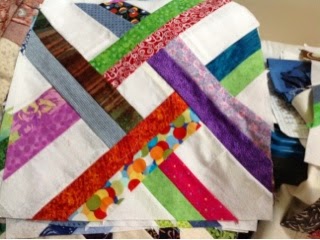 "Strip Twist" Blocks made from 2.5 inch strips.  This is a free pattern from Bonnie Hunter and is found on her website under the free patterns tab. 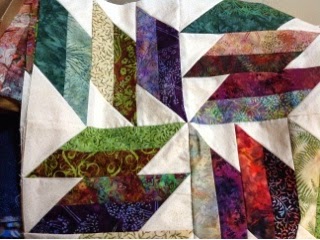 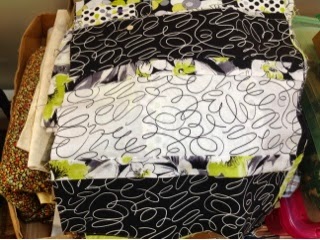 Above are some lime green and black blocks made from "Trail's End", a pattern by Kathy from Candlelite Quilts.  They are waiting to be assembled into a quilt top.  Since they are already pinned into rows, what am I waiting for???
Well the temperature outside has now dropped to 76 degrees. But it is still a sunny day. Hopefully the allergies stay under control or I might not be doing any sewing, just sneezing and blowing my nose!
Until next time...
Happy Sewing and Creating
Louise who is looking the window watching spring unfold on the Island
Posted by Louise at 5:06 PM No comments:
Email ThisBlogThis!Share to TwitterShare to FacebookShare to Pinterest
Labels: Bonnie Hunter, Candlelite Quilts, Grand Illusion, Sue Pelland's, Trail's End, UFO Stash
Newer Posts Older Posts Home
Subscribe to: Posts (Atom)