Goodies have arrived in the mail!

Recently, I found a great "Midnight Madness" project to include in your retreat bag.  The pieces came in the mail yesterday. 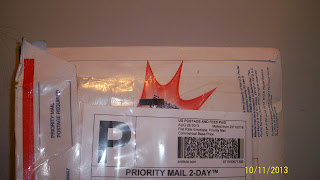 I am soooo excited to let you know that the goodies are beginning to arrive!

I am waiting for more so I will keep you up to date as they arrive.

Will we see you in January at the Quilter's Weekend Retreat?
Posted by Louise at 1:54 PM No comments:
Email ThisBlogThis!Share to TwitterShare to FacebookShare to Pinterest
Labels: Quilters' Weekend Retreat

Or did you actually read the directions, Louise?

I have been working on  "Lazy Sunday " a Bonnie Hunter, four part Mystery Quilt featured in the four past issues of Quiltmaker magazine this year.  The sewing has been rolling along and progressing to the point of actually assembling the blocks (see this post for the first block assembly ). The other day I decided to work on the parallelograms that will make up the last border. 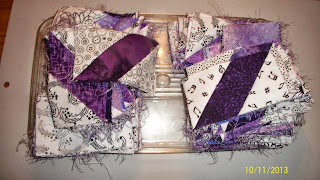 Nice huh?
Until you actually read the directions!

Leave them be and let them march around the quilt, all facing the same way.  (Oh, did I mention that I have already sewn the seam for the little triangles that will be cut off each corner?) 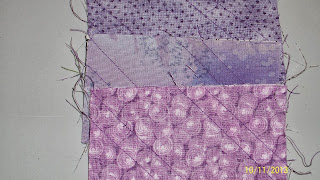 Or, do I un-sew half of the parrallelograms in order to have them march the opposite way? ( oh, did I mention that I enlarged the quilt so that I increased the number of parallelograms to accommodate the new size and was hoping my math was correct?)

Or, do I do something different?  Such as, let half march to the middle and then add a piece of background for them other half of the border?

Or, make new parallelograms (oh, did I mention that I have very little left of the purple fabric, only four pieces left of the original 18+ fabrics? I suppose I could go shopping but some of those original fabrics came from deep, deep in the stash circa 1980) 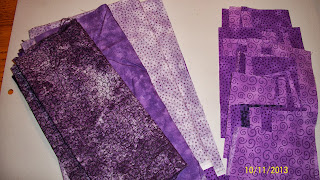 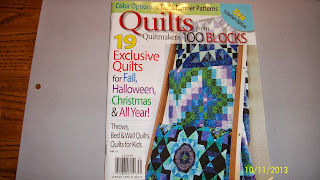 If you have an idea, please leave a comment to let me know your idea.  There is a copy
of latest issue of "Quiltmaker's Quilts from 100 Blocks" for the winner who will be chosen randomly from those who comment.  The decision does not have to be made today, so you have until the 15th of October to comment in order to win.

Thanks for your help!

Global warming at its best?
Any day it is 77 degrees at 4 in the afternoon, is a day to take time to sit on the deck. Yes, the leaves are beginning to turn colors and beginning to fall and yes the squirrels are annoyed with me for interfering with their work.  But I know that this is New England and it could be snowing next week! Can you see that tree in the distance which has already changed to brilliant yellow and orange?
What a lovely contrast with my neighbor's bright pink impatiens!
So I will sit on the deck and enjoy this little blast of summer knowing that it could be the last one for the year.
I will return to my sewing later.  Wait until you see what I have been up to!
Posted by Louise at 4:28 PM No comments:
Email ThisBlogThis!Share to TwitterShare to FacebookShare to Pinterest
Labels: Seasons on the Deck
Newer Posts Older Posts Home
Subscribe to: Posts (Atom)